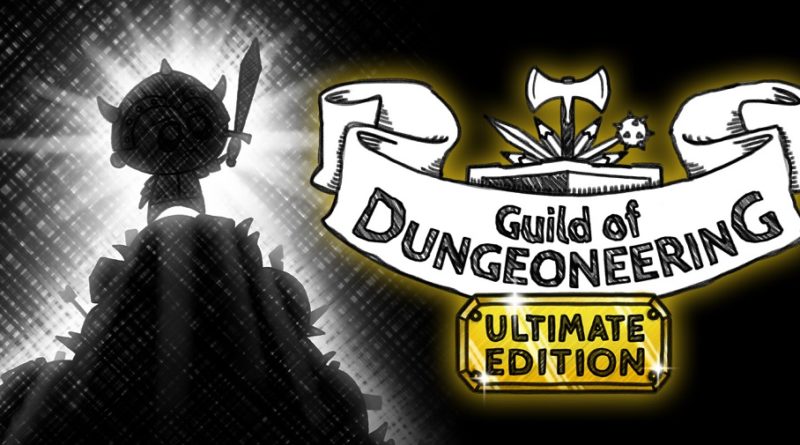 Flying kaida is an up and coming streamer. You can find more about her here. She is a dragon, She is ADHD (which shows during her stream, don’t tell her I said this) so I had to be cautious while presenting her with the offering of the review and see that I not get eaten myself. Also… not to touch the hoard. You never touch a dragon’s hoard. It is not done. I can talk about how to handle dragons for hours, but otherwise we wouldn’t get to the review, written by a real dragon.

When you have to time, so sublime, to rhyme,
Make a dragon tame, and let’s have a look at this game.

If you like tabletop roleplaying games and card games, let me tell you about a game that eloquently combines the two! Six years after their initial launch, Gambrinous is releasing another instalment of their super fun game, Guild of Dungeoneering!  It’s a casual dungeon crawl game putting you in the seat of the guild leader trying to compete with another rival guild by sending your minions wonderful employees to their penultimate doom fame and fortune more than their wildest dreams could ever fathom! (This if fine right, right? Okay just want to make sure we hire more minions. Must remember to not put minions and doom in our job application posters again… okay got it!) AAAAAANYWAYS, Lets explore just what makes this game so fun, and compare it to their last version! Welcome to The Guild of Dungeoneering: Ultimate Edition!

This game has some serious charm. We’re introduced to our character, the guild leader, being spurned by another guild. What’s a person to do but open their OWN rival guild… that’ll show them right!? All we’ll have to do is hire some chumps (that’s fine to say right? No? Ugh fine, I’ll try to remember to change it in editing.) But seriously, chump is the first class of the first dungeoneer! You’ll be building up your guild using the gold your guild members bring back to unlock knew characters, better items, and more! And you can’t get a good grasp of the game until you actually load it up and listen to it. The music really makes this game with their bard singing at nearly every point. Whoever wrote these songs is hilarious, teasing about failures or the dead mea-… I mean job applicant, as they’re sent out. There was no end of laughter on my part!

As you send your members on missions, you’ll be mostly controlling them. However, each unit tends to have varying preferences to go to. The chump prefers fountains then gold then wherever. However, once you get a cat burglar, they will always head towards gold first! You’ll be in charge of building the dungeon as you go to! You’ll get a small set of dungeon, monster, and treasure cards every turn to place,  as long as there is room for that card. When you have to fight a monster, each class has their own deck of cards to fight with, from the Chump’s “Cower” cards to the Cat Burglar’s “Cat Nip” and “Claw” cards! As you defeat monsters, you’ll get gear to help you out through the dungeon! You’re gear starts over each level, but wining can net you a new fun ability!

This game is serious fun to play, but not without it’s challenges. If your guild member fails… they die! You lose them and have to put up another wanted poster. This leads me to something that was a bit less fun. Trying to get through higher levels without the leveled abilities seemed to get extra difficult if you lost all your members and are starting over, but you cannot replay the easier levels. However, this is all part of sending them out to death traps, I guess. Take your time, think out your moves, and find a strategy! Different classes specialize against different types of enemies and have special abilities! The bruiser going full armor for example, really effective early on! Give all of the classes a try, and definitely grab a blessing when you can from the “Expand the guild” option! They are so helpful to not dying in the first couple fights before you get loot!

Now for the differences. The Ultimate Edition has been rebalanced, has a few more classes and a LOT more bard songs (truly a selling point for me!) The best thing about the Ultimate Edition for me has got to be the rebalancing. It’s hard to explain, but it just makes if feel smoother. It feels like you’re slogging over and over through the dungeon less. And this is somehow with you getting less gold from the missions! Things are more expensive when you unlock the second tier, but the game just plays in a more fun way!

Another thing that I think is an improvement, you can now edit your chumps! You can change their appearance when you get them! I am way to obsessed with appearances in video games! I like being able to theme everything and the ability to have some say in your chumps is huge for me. You can now have a team of dapper pushovers, or just spam random over and over to have a rag tag group! And if you stream this game, you can even name them and design them after any viewers if you wish! This simple customization feature really brought a lot of value to this game in my opinion!

In the old version, the tutorial took control of most of the tile and monster placement and didn’t really tell you how to do much at all. The overhaul of the first dungeon spelled things out much better! It made it way easier to figure out what I’m doing! And on top of everything, there are THREE new classes! You can now gain the Super Chump, the Ultra Chump, and the Grave Digger, who just happens to be my favorite class to play. The way they “borrow” one of your previous character’s items for as long as they live! (I mean… they’re not going to be using it right? Don’t worry I’ll put it back… eventually).

In conclusion, I definitely recommend trying this game. If you like games that like dungeons and dragons, or any sort of card game, this is for you. It’s challenging and funny and very immersive! You can really get attached to your favorite chump! Seeing them delve into these dungeons to find their fame! I’ve not laughed so hard in a game in a while. If you would like to give it a try, you can purchase it on either Steam or Mobile! You can take this game WITH you wherever you go! I know I’m going to be continuing to play it!

(How was that? Do you think they bought it? We have these job application posters to fill and we’re not getting enough lambs! You don’t think that it’s because I’m a dragon, do you? I mean, I’m not that scary of a dragon! How else will we surpass the other guild!?) Painting miniatures as an Adhd’er/Autistic